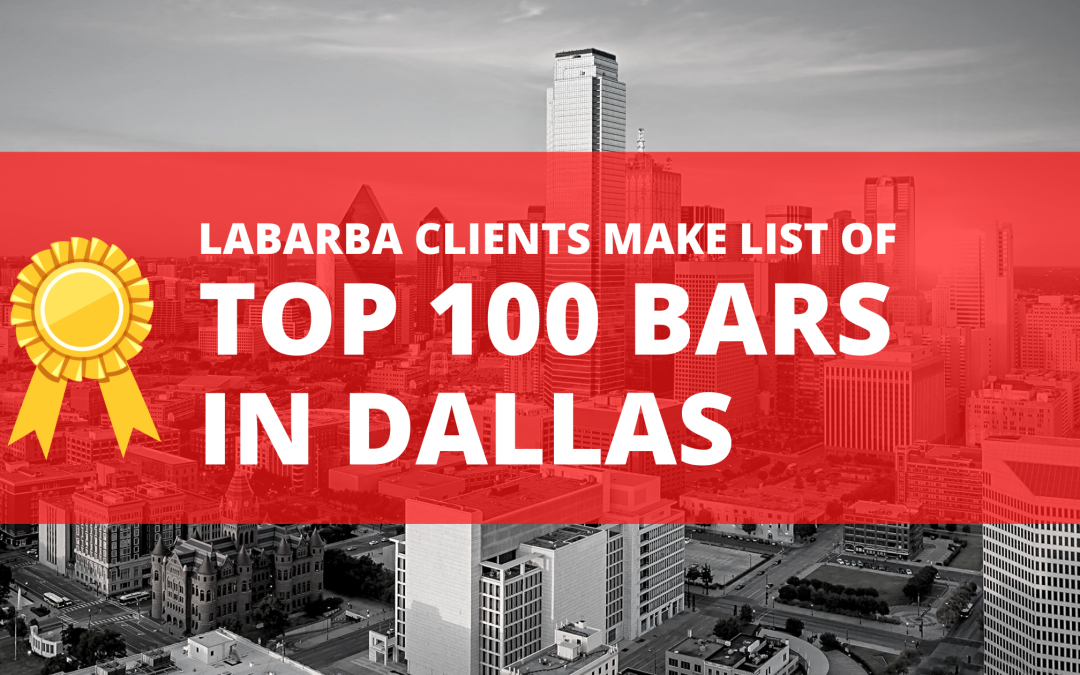 Check Out the Best Bars in Dallas

The Dallas Observer has named seven LaBarba clients in their ‘City of Ate’ piece featuring the 100 Best Bars in Dallas for 2021. We are so proud of these clients for their accomplishments, and for showing that LaBarba truly works with the best of the best! Let’s take a look at what makes each of these bars stand out from the competition.

First up on the best bars list is Three Links, which is known for having live music almost every night, especially punk bands. It first opened in March 2013 on 2704 Elm Street and its name is an homage to the Independent Order of Fellows, which is an organization that focuses on the personal growth of its members. Another great spot for live music is the Balcony Club. Specializing in live jazz, this bar and restaurant has a sophisticated, yet cozy ambiance that is perfect for a date night. It has a vintage feel and opened around 1988 on 1825 Abrams Road.

Next on the list is Lakewood Landing on 5818 Live Oak Street. The bar has been in business for over 50 years and has a fantastic assortment of food and drinks. The walls are covered with old photos and other memorabilia that give the space a true dive bar look. Another mention in the article is The Old Monk, a bar and restaurant located on 2847 North Henderson Avenue. It was established in 1988 and features craft beers, liquor, and an extensive selection of food. During the pandemic, The Old Monk started serving breakfast on weekdays and there is also a brunch menu for Saturdays and Sundays.

The next featured bar, Strangeways, can be found on 2429 North Fitzhugh Avenue and keeps more than 40 beers on tap and in constant rotation. It is designed with a trendy, industrial style with unique art pieces and a laid-back atmosphere. The bar also has a collection of specialty liquors and a quality food menu. Originally a national fraternal organization, Sons of Hermann Hall is another historic Dallas bar known for its musical history and fun facts from the past. Located on 3414 Elm Street, the bar offers activities such as swing dancing nights and lessons for beginners. The bar is also known for its campfire jam where musicians play around an electric campfire.

Lastly, the Texas Theatre is an old bar and movie theatre that opened in April of 1931 on 231 West Jefferson Boulevard. There are several historic stories from the theatre including the time that Lee Harvey Oswald hid there from the police. The theatre closed a few times, but now it’s thriving and continues to show films and serve drinks and snacks.

Each of these spectacular bars has its very own feel and specialty that qualifies them to be in the top 100 bars of Dallas. Now that the Texas bar and restaurant scene is reopened, be sure to check them out and show your support for these local masterpieces!